FREE Makita 18v Vacuum when you spend £400 on Makita Products 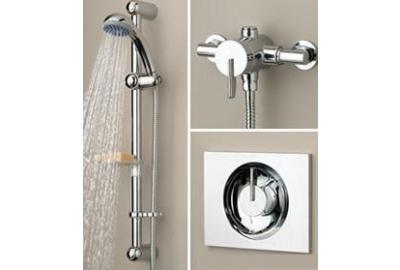 Posted in: News
By Liam
No comments
More from this author

Mixer Showers offer many beneﬁts in terms of performance and aesthetics. They usually deliver a higher ﬂow rate than other types of shower, and there is a wealth of contemporary and traditional design choices on offer, including concealed options which enable a very neat look to be achieved. Alongside this, today’s mixer showers offer features that make showering safer, and save water. lt’s no wonder they have become so popular. However, before going ahead with an installation it’s important to remember that the effectiveness of this type of shower is largely dependant on a good hot water supply from a boiler or cylinder, and whether the cold water pressure is constant, and (preferably) balanced.

In some cases there might not be enough hot water to meet demand, so it is vital to check this; if an unsuitable shower is ﬁtted this could lead to poor performance and costly call backs — potentially damaging the reputation of both the installer and manufacturer. If a mixer shower isn’t suitable then the reasons why should always be explained to the customer and alternatives, such as an electric or power shower, can be offered.

In terms of siting, a mixer shower’s location will depend on the speciﬁcs of the enclosure or wall that it is to be mounted in/on — and the manufacturer’s installation instructions should always be followed closely. The connection centres of an exposed shower valve are usually 150 +/-1 mm or 153 +/- 1mm. Connection to a concealed valve is more involved, and generally the dimensions have less commonality. If the shower valve is to be ﬁtted into a solid wall it needs to be chased out to allow the valve to sit at the correct depth, receive the water supply pipes and allow connection to either a ridged riser or a ﬂexible shower hose. Any ﬂexible hose and handset installation must meet any backﬂow prevention requirements.

When installing a mixer shower it is now considered best practice to opt for a thermostatic type or an ancillary thermostatic mixing valve – TMV — especially if there are young children, elderly people or vulnerable adults in the household, who can be more susceptible to scalding. Both options regulate the shower’s temperature and will shut down the water supply if there’s a dramatic change in either the hot or cold water supply, reducing the risk of scalding. If a TMV is selected, it must be suitable for the water supply system it is being used with — and it is important to position it correctly to ensure it can do its job effectively and safety isn’t compromised.

In addition to the scalding risks associated with hot water temperatures, ‘ exposed shower bodies can also cause a safety hazard, especially if users don’t understand the risks, or are more likely to lose their balance and inadvertently touch or grab the shower to steady themselves. So, to further reduce the risk of scalds in the bathroom there are now showers available that remain cool to the touch.

As well as being able to offer safety beneﬁts, some mixer showers provide water saving features too, helping the environment and reducing utility bills, so it’s a good idea to discuss these options with customers. The Bristan Artisan showers range, for example, has an eco-stop button, which can help users save up to 50% of their shower water usage. In addition, some showers are supplied with optional ﬂow regulators, which can provide ﬂows from as little as 4 l/min. Flow regulators can also be retroﬁtted between a mixer body/shower valve outlet connection and the shower hose or, if a TMV product is ﬁtted on a combi heating system, between the mixer body and both shower valve inlet connections, to ensure the valve’s performance is maintained during colder winter months.

The good news is that manufacturers have ensured that water efficient products still deliver high performance and end user comfort, even luxury. For example, Bristan’s new EVO shower handsets with Fluidic spray technology create a warmer, more luxurious shower experience and yet use less water than a power shower.