Makita Cordless Garden Power Tools gets our Seal of Approval 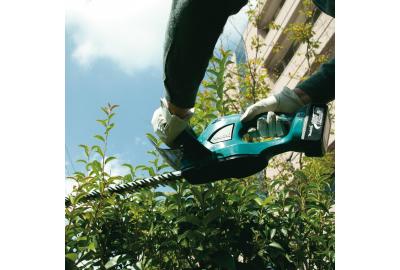 Posted in: Buying Guides, Makita
By Izaak
No comments
More from this author

Makita Cordless Garden Power Tools gets our Seal of Approval

We, at Buyaparcel like to stand by our product offering as much as possible. Recently, I had the opportunity to try out 2 of Makita’s 18v garden power tools. The DUH523Z hedge trimmer and the DUR181Z line trimmer. Taking the test models home, with a couple of non-charged BL1830 (18v 3Ah) batteries, I set to work on my much needed gardening.

I have tried petrol and corded machines in the past, but much to my own shame I hadn’t given the battery tools a chance before now. To be honest, I simply thought they were a gimmick and that for tough jobs, the 18v power just wouldn’t be man enough. How wrong I was! The DUR181 line trimmer was like a knife though butter on the overgrowth, even through some substantial weeds that the summer rain had helped grow into monsters!

The Hedge trimmer was no disappointment either. My conifers and similar hedges were simply and quickly trimmed into a tidy row. I even found some of the thicker branches that would normally be left to something like a chainsaw or bow saw, could be cut in half, if you press lightly on the branch and cut down slowly. See it in action.

The part-charged batteries I used almost did my entire garden. With the BL1840 (18v 4Ah)and BL1850 (18v 5Ah), I could only guess how much gardening could be done on a single charge! In summary, I believe these products to offer corded-like power from a cordless tool. See the video for an idea of how quickly the hedge trimmer slices though the conifers and you will never want to use your old shears again!