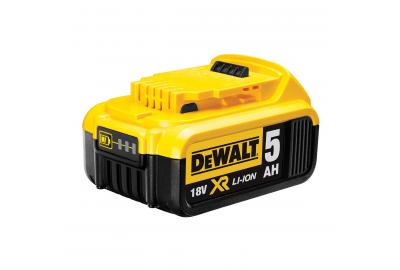 Posted in: News, Dewalt
By Liam
No comments
More from this author

With recent addition of the Makita BL1850 and Bosch 18v 5.0Ah battery we knew we wouldn’t be waiting long for the Dewalt 5 amp battery to arrive.

The great thing with this battery is that it will fit any existing Dewalt 18v Li-Ion tools. Also, Dewalt have worked hard to make sure that an extra amp doesn’t mean extra weight. The 5.0Ah battery weighs almost identical to the 4.0ah battery.

As you would expect, the Dewalt DCB184 5.0Ah battery has a longer run time than any Dewalt battery we have seen before. It will run 25% longer than a DCB182 4.0ah and 66% longer than a DCB180 3.0Ah battery. While this means your tools will last longer on the job, this also means they will take slightly longer to charge. However as they store more power and deliver longer run time, the down time will be infrequent.

Dewalt’s overheat, overload and discharge protection are present in this battery. This technology cuts the power from the battery to the machine if you were in danger of causing damage to them. As with the rest of the Dewalt XR lithium ion batteries, the DBC184 has an LED indicator showing the amount of charge you have left.