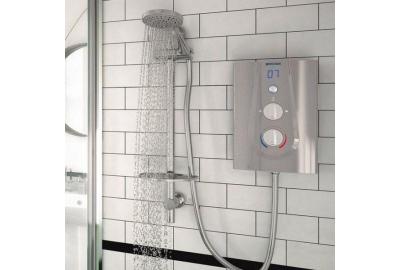 Posted in: Product Reviews, Bristan
By Liam
No comments
More from this author

Other features of the Bristan Joy Thermostatic Electric Showwer include a push on/off button and separate flow and temperature dials. These are easy to operate while a smart digital temperature display makes it easy to see when it reaches your chosen temperature.

This Bristan Shower also incorporates a ‘phased shutdown’ which clears all of the hot water out of the shower when you turn it off so that the next person who uses it doesn’t get a blast of hot water when they first turn it on. Not only that, but its universal footprint means that it will cover the space left by your old shower, saving you the hassle of re-tiling.

The Joy Thermostatic has the same footprint as the rest of Bristans Electric Showers, so with multiple entry points is the ideal replacement shower for Bristan New Team NT Electric Showers, which Bristan have replaced.